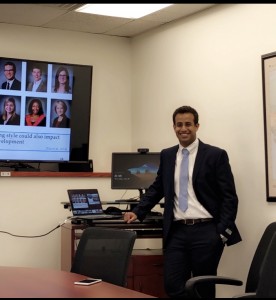 Mohammad Alsager Alzayed is an Assistant Professor of Industrial & Management Systems Engineering at Kuwait University. His research interests are in the intersection of human factors, engineering design, and engineering education.

Academics have always been important to Mohammad from an early stage in his life. He graduated as the Valedictorian of his high school year from the American Creativity Academy of Kuwait where he also earned an International Baccalaureate diploma.

Mohammad received his BS Industrial Engineering (minor in Six Sigma) in 2016 from Penn State University with academic distinction where he also received the Industrial & Manufacturing Engineering Department Outstanding Senior Award, an award intended for a senior that displayed scholastic achievement, integrity, leadership and character, while maintaining a GPA that is in the top 10 percent of the graduating class.

After completing his undergraduate studies, Mohammad pursued his graduate studies in Industrial Engineering at Penn State where he completed his MS (’17) and PhD (’20) degrees under a fellowship from Kuwait University. Mohammad was a member of both the BRITE lab and THRED group as a graduate student where he was co-advised by  Dr. Scarlett Miller and Dr. Chris McComb. For more information about Mohammad’s journey at Penn State, read this article.

In the long run, Mohammad Alsager Alzayed aspires to have a global impact on engineering education.